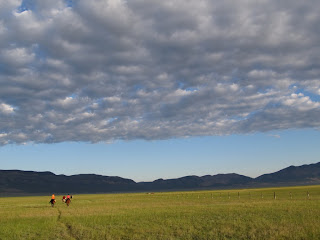 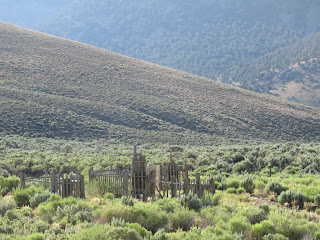 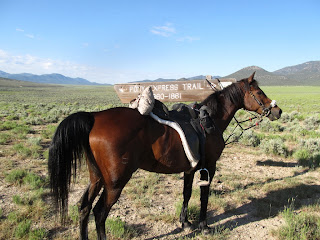 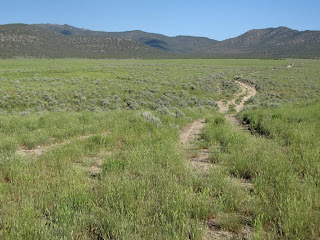 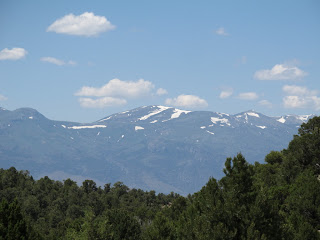 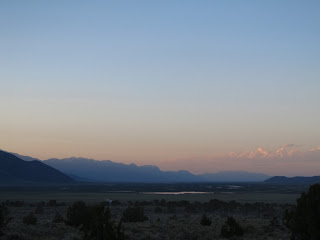 July 8, 2011 – Schellbourne to Ruby Valley Nevada – Today was a long day.  The day is regarded as the toughest of the trip because it is 56 miles across the desert with limited water and several mountain ranges to cross.  Additionally, crew access is very difficult so only one vehicle, with no trailer, volunteered to cross the trail with us, and the vehicle was still required to make detours of many miles around the rough trail sections.  I gave the trail some thought, decided that I have been riding my horses half days with the idea that they would be available for the tough days, and chose Frank to go the full distance.  We started early in the morning and crossed the twelve miles of the Steptoe Valley.  I rode at the back of the small group.  After the Steptoe, we climbed through the Cherry Creek Mountains, Butte Valley, the Butte Mountains, Long Valley, the Maverick Springs Range, and into Ruby Valley near the site of the Ruby Valley Pony Express Station.

In Egan Canyon we passed the pioneer cemetery where three Army soldiers and possibly a Pony Express rider are buried.  The soldiers died in 1860 during an Indian attack on the Pony Express station.  The Pony Express rider's grave and identity are unknown and uncertain.   Today, the cemetery is quiet and peaceful, but 150 years ago, the area was unknown, hostile, and wilderness.

By Ruby Valley, Frank had caught the leaders and we all decided to tie for first and draw straws.  Frank was strong and I opted to show him in the Best Condition judging.  Frank is well into his 20s, but he is still a tough horse.  Almost ten years ago, Frank was in his best years and he was an endurance animal.  Cindy cleaned Frank, and after the required hour of rest, I showed him with an out-and-back trot, and circle trots in either direction.  He looked good.  At the ride meeting later that night, the BC was announced and the winner was "Frank, ridden by Tom Noll."  It had been years since Frank received a BC and it was very satisfying to receive BC on the 2011 XP, on a day with very difficult trail.  Frank is my partner on the trail and I'll never have another like him.  It was a day to remember on a special horse.