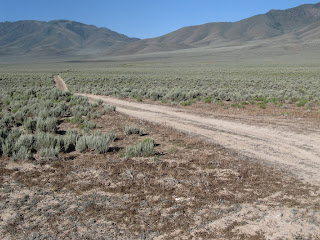 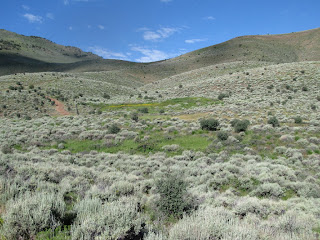 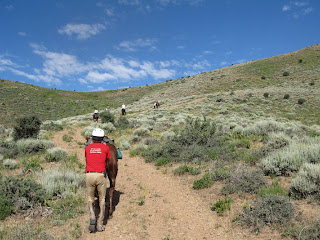 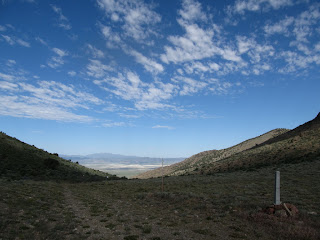 July 9, 2011 – Ruby Valley to Mount Hope – Another early morning start crossing the Ruby Mountains, Newark Valley, the Diamond Mountains, and across Diamond Valley.  The climb over the Ruby Mountains was not difficult.  We started close to the top of the pass and the southern Ruby Mountains are not too high.  The northern part of the range has numerous peaks over 12,000 feet and appears quite impressive from the Pony Express trail.  A ridge run along the crest of the Ruby Mountains would be epic, but possible, and, the run would be spectacular!

We have seen signs of the wild horses throughout Nevada and today a bachelor stallion challenged our group.  The horse charged our group several times and actually ran along the side of us for three or four miles.  Eventually, the stallion broke off and disappeared into the sagebrush hills.  He was a solid good-looking horse and appears to do very well in his desert life.

After Newark Valley, the trail makes a steep climb over telegraph pass.  We saw a family of mustangs in the distance, but most of trail over the pass was occupied by range cattle.  The cows had wallowed in the springs and creeks and the trail was infested with flies and mosquitoes.

I rode Whiskey and elected to stop at the halfway point on the west side of telegraph pass in the valley bottom.  Cindy and I have decided to stay in Eureka at the fairgrounds tonight and rejoin our friends on the trail tomorrow.  Tonight's XP camp is along the side of a dusty county road and we are thinking that the horses will appreciate staying in the bull pens tonight.  The horses have been tied to the trailer every night since Casper, Wyoming which was at least two weeks ago.  Walking around the rodeo bull pens should be a welcome respite from the trailer.