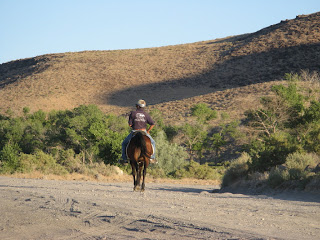 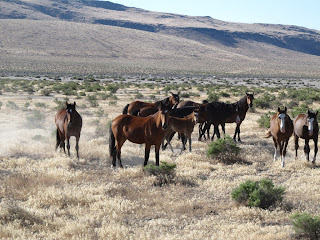 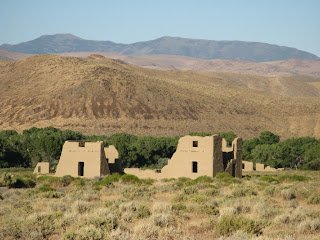 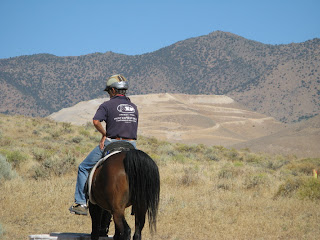 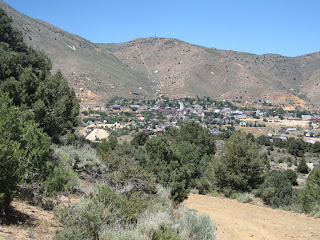 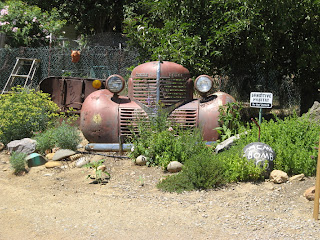 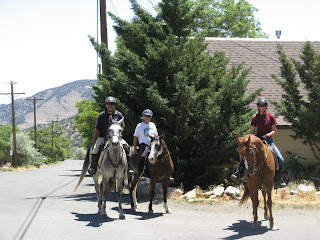 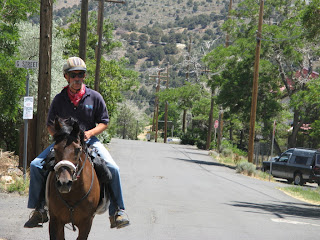 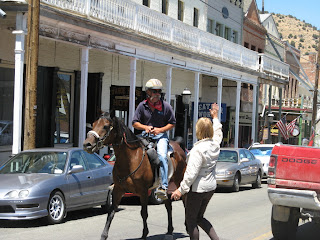 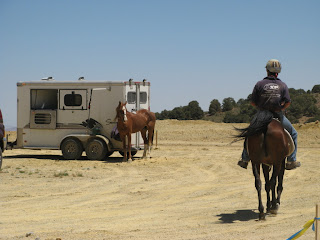 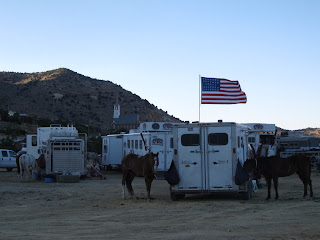 We rode through Misfit Flats, the stage set for the last Cary Grant film.  At the north end of Misfit Flat, I briefly glimpsed a dark horse approaching and I thought, "Another rider has caught me."  But no, it was a lone mustang stallion – one of the misfits.  The stallion ran on past and gathered a herd of about a dozen mustangs and they left into the sagebrush.  Soon they returned and the juvenile stallions were very curious.  I tried to shoe them away but they were persistent and I became concerned how a lone domestic horse might fare in a gang of young stallion misfits.  They were so close that I could see the pupils in their eyes.  They would retreat and then approach, each time getting a little closer.  I took my gate strap out of my pack a waved it like a ribbon and the young horses backed away.

The trail paralleled Highway 50 and then skirted the town of Dayton and the trail was very rocky.  Frank and I were alone and I was having difficulty with so much development after so many days on the Pony Express trail.  Somewhere on the east side we were trotting along and Frank stumbled and went completely down.  I came off the right side and landed hard amongst his stumbling feet.  I hit my head and Frank's feet banged me too.  It was a good day to be wearing a helmet.  All motion stopped in a cloud of dust and I took inventory.  My right elbow was hurt and my left hand was bleeding.  I wrapped my hand, walked for a bit, and then got back on and continued up the trail.  I hurt but no one was around so there was nothing to do but go on.  Eventually, I began to feel better although my elbow is still swollen.

From our viewpoints, Dayton is not a clean town.  We skirted the north side of town on the edge of the desert.  Many had used the desert as their own private dumping grounds.  Not only was there a continuous trail of trash in the desert, but for some dwellings it was difficult to determine where the yard ended and desert dump began.  Several riders commented about the trash.  In all of the trash the one bright spot was Patsy, Dave Rabe's sister.  Patsy came out to meet the riders on the last day, including her brother, and had water for the horses and the riders.  Patsy helped me wash my hand and clean the abrasions.

After Dayton, the trail ascended to Virginia City along the Chinamen Trail.  Virginia City is an old mining town and the site of the Comstock Lode.  The Chinese worked in the mines but were forced to live outside of the town by the prevailing conventions of the 1860s.  The Chinese climbed to work in the mines and mills along the Chinamen Trail which today is still a very steep trail strewn with rocks.  I led Frank up side of the mountain.  It was hot and there was no breeze on the canyon trail.

We climbed to the pass, on to the gap, and saw the first views of Virginia City.  We made our way into town and I rode in along the main street of town even though the designated route was along side streets.  Virginia City is a tourist town, I had ridden since the bank of the Missouri River, and I was going to give those tourists something to talk about.  Frank and I rode right up main street blocking traffic.  We walked the length of the main street and made our way along side streets to our camp on the mine tailings in Virginia City Nevada, two-thousand miles and two months from our starting point.  The next day we would all gather for breakfast to mark the end of the trail, Cindy and I would continue to the western terminus on the Pony Express Trail, but on this afternoon, I rode up and tied Frank to the trailer at our last camp on the 2011 XP.