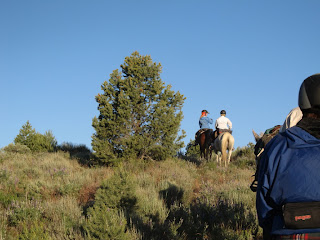 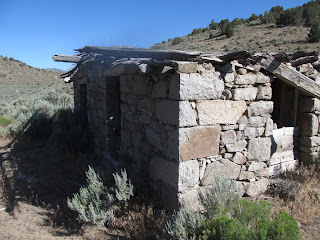 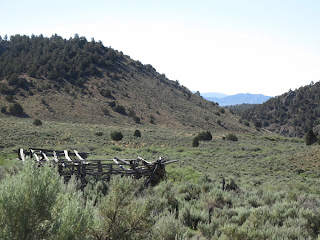 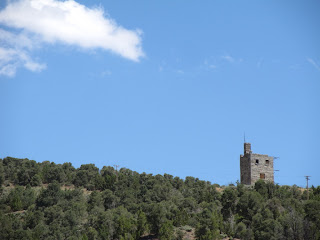 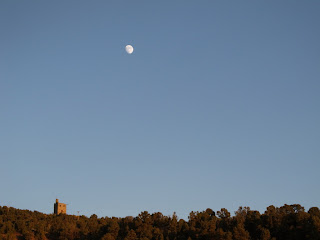 July 11, 2011 – On the Trail to Austin Nevada – Whiskey is moving westward on the trail while Frank recovers.  Frank may be ready for a few miles during the last three days of the trip, but today he is recovering from surgery.  Whiskey has really matured as a trail horse.  Several times today the trail went through thick willows and along stream beds.  The mosquitoes were thick.  Whiskey pushed on through the willows and through the rough footing even when other horses had difficulties or balked at the trail choices.  Whiskey walked through some very rocky and difficult sections even slipping in spots because the footing was so bad.  Whiskey has really stepped up to do the miles while Frank takes a few days off from the trail and I am very impressed.  We passed the remnants of the Simpson Park Pony Express and stagecoach station which was destroyed by the Indians in the summer of 1860.  The station was rebuilt and the mud and log structure may be remains from the period.

There are only four riding days left.  We will ride to the Cold Springs Pony Express Station tomorrow and then take two days rest at Cold Springs before we travel on to Virginia City for the last three days.  Cindy and I are still thinking about riding on to California but our first objective is Virginia City.  The horses are thin and they will need a few days to recover before they face sections of the Tevis trail.  Even so, we would like to continue on to California.

We are camped at the roping arena in Austin Nevada.  The trip has been hard on the crews, on the horses, and on the vehicles.  Gary Pegg had a wheel bearing failure on the trailer today going up to Austin Summit.  Janus stopped the rig in the middle of Highway 50 and Searle extinguished the fire while Janus rescued the horses.  Now, Gary has left for Fallon in search of parts.  Gary may consider painting flames on his trailer after the wheel bearing experience!

We will make our own trip to Fallon on Wednesday.  My oil pressure gauge has shown declining oil pressure.  I made an appointment at the Ford dealer to check the oil pressure and change the oil.  Four thousand miles of highways, dirt roads, gravel, dust, and steep grades, all while towing a fully-loaded horse trailer, have put a lot of stress on the vehicles.  Cindy and I have been lucky in that we have not faced any serious mechanical problems.  Wednesday will be a good day to check the declining oil pressure.

We are camping in the old mining town of Austin Nevada.  The actual ride camp is about twenty-five miles southwest of town in a dry lake bed.  We have a nice shady campsite at the roping arena with water and showers so we, and several others, have decided to stay in Austin and perhaps search out a local restaurant for dinner.  One oddity in Austin is the replica of a medieval Italian castle on a ridge just outside of town.  The "Stokes Castle" was built by a railroad and mining magnate as a summer home in the late 1890s but now, the stone tower is just another roadside attraction.  The castle is enough of a curiosity to have a description in Wikipedia.

On Friday, we will begin the last three days of riding.  It seems like a different time when on the first day, we stopped at a store in eastern Kansas, completely soaked from the rain to buy some supplies.  I left a puddle of rain water on the floor of the store while I considered my purchase.  Eastern Kansas was many miles ago and the time seems so different than today camping under the willow trees in the afternoon heat in Austin Nevada.