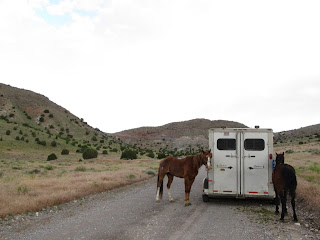 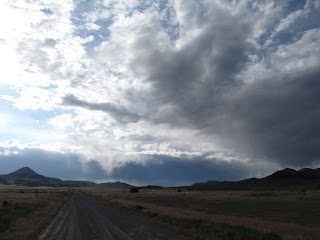 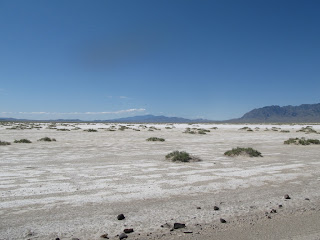 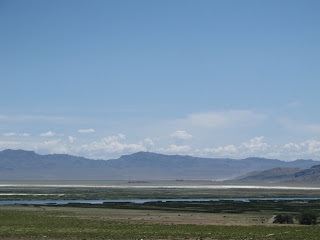 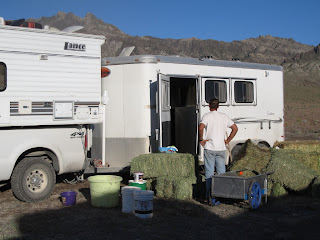 June 30, 2011 – the last day of June.  From Simpson Springs to Fish Creek -- We rode all through June.  We started the month in Eastern Nebraska and today we are in the desert of Western Utah.  We are camped out in the open with no shade trees for many miles.  Even though we are camped near Fish Lake, the desert here is alkaline salt flats and marshes and there is no water.

Today I rode Whiskey the second half of the day.  The crews took the vehicles over Dugway Pass today and the Dugway grade is where vehicles experienced difficulties on previous trips.  Gary Pegg and I left camp early today and drove to the lunch spot.  The Dugway grade is fairly steep but short.  Cindy and I unloaded the horses and she led the horses up the grade while I drove the rig.  After passing over the summit, I ran back and helped Cindy with the horses.  We had no difficulties with the grade.  I thought that it would be better to unload the horses rather than to have mechanical problems and wish that I had unloaded the two horses.

After the driving to the lunch stop we unloaded the horses and left on the trail.  Today's trail followed the road through the salt flats.  Generally, the trail was about a tenth of a mile north of the road and the pioneer wagon ruts are still visible in the sagebrush.  The trail and the county road were the same through the Fish Lake National Wildlife Refuge.

After going around the marshes, the pony trail separated from the road and headed west through another pass in another mountain range.  We climbed to the pass on a rocky trail.  At the top, the trail went north to an abandoned mine.  I got off and led Whiskey down the rocky hillsides to the salt flats and we finished the day.  Fortunately, today was not as hot as yesterday and Cindy and I are sitting on the north side of the van in the shade watching for the other riders.

The BLM requires certified weed-free hay and the camp formed a co-op and ordered hay from Crocket Dumas, a long-time endurance rider from Escalante Utah.  Crocket had two or three hundred bales of the hay delivered to the camp and many of us are deciding where to put the hay that we ordered.  One problem with ordering hay even a few days in advance is that we are never sure how much we will need and we are never sure how big the bales are until we see the hay.  We'll have heavy loads for the next few days.  Again, there is no cell service.