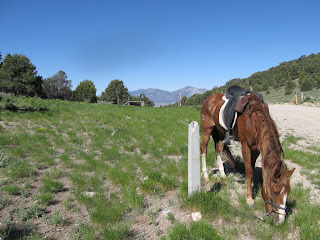 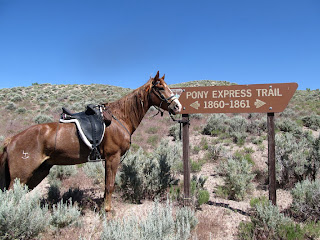 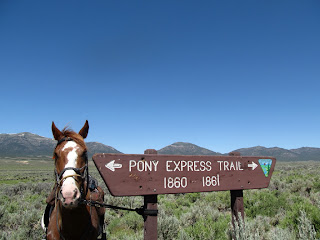 July 3, 2011 – Schellbourne Nevada – Schellbourne was the site of both a Pony Express station and an Army fort.  One of the stations east of here, Antelope Spring Station was burned by the Indians in June 1860.  During the 1860 to 1861 Pony Express period, there were considerable Indian problems in Nevada.  The trail today also passed Spring Creek Station which was described by Richard Burton as a "mud hut."

The road today was described as difficult as well and we decided to drive about 100 miles on pavement rather than 50 miles on dirt.  We awoke early and drove to the Schellbourne camp.  On the way we passed a herd of mustangs, all chestnut colored and well off the road.  Even at the distance, we could observe their keen sense of awareness.  After arriving at the camp, I saddled Whiskey and rode east on the trail for about 25 miles out and back.  My turn-around point was near the site of the Spring Creek Station described by Burton as a "mud hut."  Looking at the terrain, I can understand the "mud hut" description.  Today, the area of the "mud hut" is sagebrush, low shale hills, and a few sheep.  Sometimes it is amazing to think that both Mark Twain and Richard Burton passed through this area.  And, Mark Twain traveled on these trails during the operation of the Pony Express.

To get to the turn-around, I rode over Rock Springs Pass which is about 7500 feet in elevation.  Whiskey had a difficult day and climbed the pass twice, once from each side.  There were streams on both sides and the east side of the pass had meadows with wild flowers including purple-blue iris.  The Schell Mountains even have a few conifer trees interspersed with the juniper.

Tomorrow is the Fourth of July and I have my 33-star US flag flying from the back of the trailer.  Tomorrow means that the trip ends in only two weeks on the 18th of July.  Cindy and I were talking about the places that we passed along the way.  Kansas and Eastern Nebraska seem like a long time ago but it was only a few weeks ago that I was riding Frank along the Little Blue River in SE Nebraska.  In another ten riding days, we will be in Virginia City Nevada.  It took us only ten riding days to cross Wyoming.  Cindy and I would like to take a few more days to ride the Tevis trail and finish in California, but in either case, the 2011 XP is in its final weeks.

Utah was tough and I remarked that it was far enough that we felt the stress of the trip but not close enough to the end to know that we can make it to the finish.  The feeling is similar to the feeling at about 65 or 70 miles into a 100-mile run or ride.  Now that there are only ten days left, I am starting to think that the two horses just might make it all the way.  Frank is solid and Whiskey is good except for some intermittent lameness and a saddle sore on right side of his back.  The lameness is residual from the laminitis and I cleaned the saddle sore and covered it with duct-tape – an unconventional treatment.  Both horses are thinner than I prefer.  There are still some very difficult days ahead but I think that they can both make it to Virginia City.

Again, there is no Internet cell service so posting this note will have to wait.