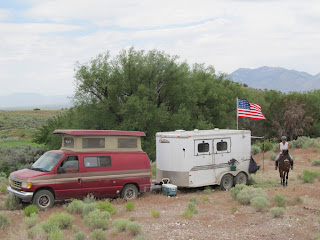 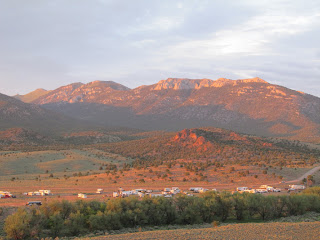 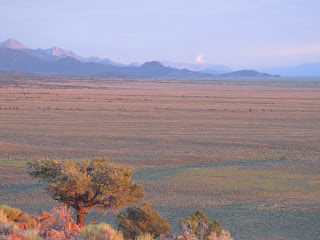 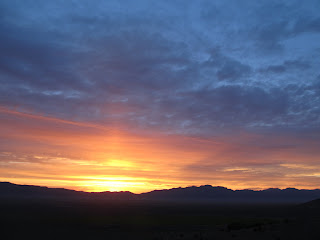 Independence Day – July 4, 2011 – Near Schellbourne Nevada – We are still in an area with no Internet service.

Today and tomorrow are loop trails in the Schellbourne area.  As I wrote before, I have mixed feelings about the loop trails because I am on the Pony Express trail to ride point-to-point from the banks of the Missouri River to California.  The reason behind the loops is to get 2,000 miles of trail in the eight weeks, but I think that it would have been better to run another two days out of Fort Bridger to Park City Utah rather than to run two fifty-mile loops in Nevada.  Still, the Basin and Range terrain is interesting and we are in a nice part of Nevada, so riding the trails has some advantages.

Today Cindy and I took both horses out for about 25 miles of trail.  We rode the first half of the 50-mile loop with some modifications and we rode along the edge of the basin where the sagebrush yields to the juniper and pinon pine.  We saw evidence of wild horses and tomorrow we may explore a side canyon to see if we can find some of the mustangs.

We returned to the van just prior to a summer rainstorm.  The pattern that we have noticed is that a hot and dry south wind seems to precede a change in the weather and the cycle seems to repeat in five to seven days.  Yesterday was very hot accompanied with a strong and consistent south wind.  Some of our friends said that the outside temperature was 98 degrees when they arrived in camp yesterday and the camp is at about 6500 feet.  We are hoping that the next few days will be cooler than yesterday.  The wind has shifted around to the North and today has been quite pleasant.

I do not know if I have written about the change in attitudes that we have noticed in the local residents as we traveled from the Midwest to the West.  The Midwest is farm country and many of the people are tied to the land through agriculture and farming.  The saying is that the "Midwest family roots run deep."  The economy of the West has always been based in-part on the extractive industries such as mining and timber, and based on tourism.  The extractive industries tend to boom and bust cycles which lead to a transient population and a "get it now while the getting is good."  Ranching is a Western industry and I do not know how ranching fits into the explanation other than to say that ranching is often based on Federal grazing permits in the west.  In Nebraska, the ranchers such as the Rush Creek Ranch own their ranch lands.  The fences and livestock watering systems seem to be better constructed on the Nebraska ranches too.  Because of the Federal permits, the Western rancher may not own the ranch land and may not feel the same sense of family pride and responsibility when the land is administered by the US Government.  And, perhaps the Western ranchers have been mistreated by the transient workers associated with the extractive industries and the ranchers are more cautious because of past mistreatment.  My point is that the people of the Midwest seemed more open, more curious about our journey, more supportive, and friendlier than the people that we have met in the West.  My explanation of the difference between an agricultural and extractive industry and the explanation of the land ownership is an attempt to explain the difference in hospitality that we have noticed on our trip west.

Today was the 31st day of the ride.  We now have less than ten riding days remaining before the finish in Virginia City.  I am hopeful that I can keep both horses sound and healthy and ride into Virginia City on one horse while leading the other.  My objective on this ride was to get my two horses to Virginia City.  Unlike some, I have not brought a full remuda of horses nor have I been able to exchange horses midway through the journey.  Many others also brought horses younger than Frank or more seasoned than Whiskey.  However, either Frank or Whiskey has gone each day and they have gone an appropriate distance each day.  Both horses are showing signs of stress from the miles across the west.  While they are both stronger than they were two months ago, they are thinner and their reserves are waning.  However, Frank and Whiskey are my two horses and I remember the words of a song "You've got to dance with who brung you, swing with who swung you, life ain't no 40-yard dash."